The Terminology of Classical Ballet – (A to G) 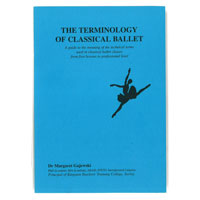 French is the language of Ballet, and the understanding of the traditional terms is essential to the correct performance of the action and quality of the movements.

Some of the terms have been in use for over four hundred years and in that time have become altered or abridged. When translated into English some sound awkward, and they rarely have the meaning given in a modern, non-specialist dictionary.

This guide therefore aims to provide the student or teacher with a sensible translation and an explanation where needed so that the meaning, as used in Ballet today, is clear. The terms are listed as far as possible in alphabetical order. Please note that French capital letters are often printed without accents.

Classical ballet developed from the ballet de cour, dancing performed at the courts of Italy and France in the late 1500s, but it was the desire of the French monarch Louis X1V to protect the art he so cherished which led to the establishment in Paris of the world’s first ballet academy, L’Académie Royale de la Danse. In 1661, Louis granted the Academy Lettres patentes, a licence which authorised thirteen expert dancers and musicians to perfect and codify the art of dance. No new step was permitted until it had been scrutinised by these académistes who met each Thursday in a well-known cabaret, L’Épée de Bois, preferring this theatrical venue to the room set aside for them in the Louvre palace.

Ballet technique has advanced, costumes and ballet shoes have changed, ballets may be abstract or tell a story of human emotions but ballet terminology remains in French. This guide acknowledges the work of the men who so carefully set it down: François Galland du Désert (Director and dancing-master to the Queen)

The author dedicates this work in gratitude to Margaret Benson, Moyra Gay and Dame Ninette de Valois who showed her how to analyse and teach.

Slow, blended movements in which the dancer shows balance, strength, line and flow of movement.

Light, quick movements. This refers to the ‘steps’ section of the syllabus. (From the Italian ‘allegro’ meaning ‘happy’).

A position in which the dancer stands on one leg, the other lifted in a curve at 90%, the arms also held in curved lines.

The position was inspired by the statue of Mercury created in 1580 by Giovanni di Bologna. It stands in the Bargello Palace in Florence and inspired the Italian ballet- master Carlo Blasis (1797-1878) to codify the position for ballet.

Depending on the arm line taken, attitudes may be ‘ordinaire’, ‘à dos’, à deux bras’, or ‘grecque’.

Arabesque à dos: arabesque with the back: the dancer turns from the waist to present the upper back to the audience.

Arabesque allongée: a lengthened out arabesque

ASSEMBLÉ: Assembled (the feet are brought together in the air).

Petit assemblé: a small step assembling (bringing together) the feet in the air.

À terre: On the ground.

(Note that not all ballet methods use this system of numbering).

BALANCÉ: a swaying or lilting movement. (Balancing the body from one foot to the other)

BALLON: the quality of rebound used in a series of steps of elevation.

BALLONNÉ: a bouncing step with a light quality (from Italian ‘pallonne’ meaning to spring up and down lightly). Because of the similarity of spelling, this step is sometimes erroneously attributed to the ballet-master Jean Balon (1676-1739) who was renowned for his ability to ‘bounce’.

BALLOTTÉ: a tossing action. This term was first used in the game of Jeu de Paume, an early form of tennis in which the ball was tossed back and forth by hand.

A beating movement. A battement is something hit repeatedly, in ballet a repetitive movement of the leg.

Battements en cloche: beating movements like a bell (the leg swings forwards and back like a bell)

Battement en rond: a circular grand battement (beating movements in a round shape).

BRISÉ: Brisé means ‘broken’ (old French ‘bruisier’ meaning to break off, to interrupt something in its continuity) suggesting that this step was so-named because the beat interrupts the flow of movement.

Brisé Télémaque: this step was performed in the ballet Télémaque choreographed in 1790 by Pierre Gardel (1758-1840).

The ballet was notated by Arthur St Léon and the Télémaque brisés can be found  in the technical manual La Sténographie (Examples 22/23).

CABRIOLE: a caper: from the Italian ‘capriola’, a goat’s leap.

Cambré: arched. The body tilts backwards or sideways from the waist upwards (as in renversé).

Barre exercises performed in the centre to increase balance and control.

CHAÎNÉS: linked together: a succession of turning steps like links in a chain (see

CHASSÉ: a chasing step (the second foot pursues or chases the first).

Chassé passé: a passing chassé (one foot passes the other).

Composé: composed of several steps (as in ballonné composé) as opposed to ‘simple’ (see under S).

CONTRETEMPS: against the beat: the dancer springs on one foot before placing down the foot which is lifted behind, thus giving the appearance of dancing against the beat of the music. In Compan’s old French dictionary of 1767 there is this quotation: ‘Les Contretemps ne conviennent qu’à de jeunes personnes et à des personnes de moyenne taille’ (Contretemps are only suitable for young persons and those of medium size)! The name is said to have been invented by the ballet-master Jean Balon (see ‘ballonné’).

Demi-contretemps: half (the second half) of a contretemps.

Cou-de-pied: the instep or (just above) the ankle joint.

COUPÉ: a cutting action: the weight of the body is cut from one foot onto the other

Coupé fouetté raccourci: a cutting action followed by a shortened whip back of the leg from the knee (see F and R).

CROTCHET: a note lasting for 1 beat.

De côté: sideways, or facing the side

DÉGAGÉ: freed or extended. The foot is freed and stretched into a point.

Demi-caractère: a dance portraying a character but using the classical vocabulary of movement.

Demi-plié: half bend of the knees

Demi-pointe: on half point (see ‘Pointe’).

DÉTOURNÉ: a turn away from the front.

DEMI-DÉTOURNÉ: half a turn away from the front.

DÉVELOPPÉ: an unfolding of the leg.

Écarté: wide open: the head is turned over the front shoulder ‘widening’ the position.

Échappé: escaping (the feet escape from a closed position to an open position).

Échappé sauté: escaping with a spring.

Échappé relevé: escaping with a rise.

Échappé sauté battu ouvert: escaping with a spring, beaten on the opening.

Échappé sauté battu fermé: escaping with a spring, beaten on the close.

Effacé: shaded: effacé is an ouverte position in which the downstage arm is raised, casting shade onto the face and part of the body. The term was taken from fencing where the body is turned to present the least possible area for attack.

Emboîté: interlocking, slotted in. The feet are ‘slotted in’ as closely as possible to each other. The term was taken from marquetry in which pieces of wood are interlocked.

Enchaînement: a chain of steps (the steps are linked together as in a chain).

En cloche: like a bell. The movement imitates the swinging action of a bell.

En croix: in the shape of a cross.

En dehors: outwards (away from the supporting leg).

En diagonale: on the diagonal.

En l’air: in the air (lifted from the ground).

En manège: in a circle. Manège = the circular ring of a riding school: the steps are therefore performed in a circle.

The name relates to a cat’s paws clawing rapidly.

Entrechat six de volée: a flying entrechat. The entrechat is executed whilst ‘flying’ through the air.

Épaulement: the use of the shoulders. The upper spine rotates in order to enhance the dancer’s line.

FLÈCHE (temps de): arrow. The step imitates the action of bow and arrow.

FLIC-FLAC: a splashing movement. These are small fouetté movements with the working foot appearing to splash water.

Fondu: melting. The movement has a melting quality.

Fouetté relevé (or sauté) en tournant: A whipped action with a rise or spring whilst turning.

FOUETTÉ OF ADAGE: This Adage fouetté is a preparation. It uses a pivot where the fouetté (the whipping action) will occur in allegro fouettés.

Frappé sur le cou-de-pied: a striking action which starts (and returns to) the ankle joint.

Petits frappés: small strikes (on the heel of the supporting foot).

GALOP: The Galop is a dance in a quick 2/4 time with the characteristic change of step, or hop, at the end of each half phrase of the music. The Galop originated in Germany where it was called the ‘Hopser’. It came to England and France about 1850. The word ‘galop’ is from old Gothic ‘hlaupen’ which describes the most rapid movement of a horse.

GARGOUILLADE: gargling (from old French gargouille meaning ‘throat’ or ‘waterspout’). The action imitates the circular movement of water in the throat (as when gargling) or water circling down a waterspout (gargoyle). The step was introduced by Marie Lyonnais in the mid-eighteenth century.

GAVOTTE: The Gavotte was originally a peasant dance from the Pays de Gap (south-east France) where the inhabitants were called ‘Gavots’. Lully (composer of dance and music to King Louis XIV) introduced the dance into the court, refining the steps for the courtiers. In 1750, Marie Antoinette, wife of Louis XVI, had the Gavotte remodelled to the taste of the period and it enjoyed a second period of extreme popularity as a fashionable society dance.

The Gavotte is in 4/4 time and has the characteristic of opening at half-measure (on the third beat of the bar). Garlands of flowers called chapelets were presented to the ladies during the Gavotte and it is from this dance that steps such as glissades, jetés, assemblés and pas de bourrées have developed.

GLISSADE: a gliding step (from old French glier meaning ‘to keep your balance on a slippery surface or on the ice’.

Why we LOVE Tap & Modern & why your child will too! 

Dance bag essentials & what to bring to class

What is Character Dance in Ballet class?

Class Award vs Exam. What is best for your child?